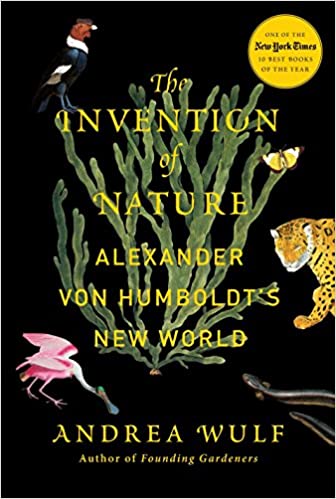 
Alexander Von Humboldt (1769-1859), an explorer, botanist, zoologist, geologist, mountain climber and adventurer, was the most famous scientist in the world during his own lifetime. The question that kept occurring to me as I read this remarkable biography was, “Why haven’t I heard of him before?”

Humboldt was the scion of an aristocratic Prussian family. As a young man he spent his inheritance on a self-financed five-year expedition through Mexico and South America, risking his life exploring regions that were unknown to the Spanish Empire that controlled them. He carried an extensive collection of scientific instruments and brought home a huge trove of plant and animal specimens. He exhaustively recorded scientific readings, experiments and observations which he wrote about for the rest of his life in international best-sellers. Humboldt was a well-documented influence on the great scientific, literary and political minds of the 19th century: Johann Wolfgang von Goethe, Henry David Thoreau, Charles Darwin, Simon Bolivar, Thomas Jefferson and John Muir, to name just a few. (On his return from Cuba to Europe, he took a side trip to the United States to meet Thomas Jefferson, who was delighted to spend a week or so talking with him!)

His greatest contribution was a new view of nature itself as an interconnected web of life, rather than a collection of separate life forms and geologic features to be named, classified and exploited by man. Wulf writes, “The irony is that Humboldt’s views have become so self-evident that we have forgotten the man behind them.” For example, Humboldt studied areas in Europe and the Americas that had been deforested for agriculture or mining and warned of the dangers of human-induced climate change. From studies of the coasts of Africa and South America he speculated that there must once have been an ancient link between them.

Humboldt lived an exciting and impactful life, and I’m tempted to list more of his accomplishments, but instead I recommend reading Naomi Wulf’s detailed and compelling biography.